I didn’t set out to make a cookie appropriate for the Olympics; I just wanted to get rid of an entire unopened jar of Chinese toasted sesame paste. Serendipitously, though, these actually would be a suitable addition to a Beijing Games-watching party. Full of toasty sesame flavor and not overly sweet, a couple of these soft gems and some fruit would fit nicely into an Asian-themed dinner.

I can’t even remember why we bought the sesame paste in the first place. We can’t have had a specific recipe in mind, or I would have opened it before now. I think it was just one of those impulse purchases at the Asian grocery, an “Ooo, that looks neat. Let’s get some” snatch off a store shelf, followed by an interminable limbo on the cupboard shelf. I should have used it ages ago for cold sesame noodles, a traditional application for sesame paste, but I’m so used to making noodles with peanut sauce instead that it didn’t come to mind until I was looking for my next elimination candidate.

In the middle of the “D’oh!” headslapping over noodle applications, it occurred to me that the reverse could also apply: where normally I would use peanut butter, this dark, rich sesame emulsion should work equally well. Having successfully used alternate nut butters in basic peanut butter cookies before (cashew-macadamia is particularly elegant), I pulled out my go-to recipe for extra-peanutty cookies from the Cook’s Illustrated crew, and threw in the half-tub of sesame seeds that has lived on my island for the last three months.

An east-west fusion of a Chinese specialty ingredient and a quintessentially American treat, these have a delicate crunch from the seeds and a deep, almost smoky sesame flavor. The only demerit is their less-than-beauteous color. They’re a dull terra-cotta, nowhere near as interesting in hue as a Qin Dynasty clay warrior, but I’m confident that they’re much tastier and less likely to break either your teeth or international artifact appropriation laws. If you can get the presentation past the artistic merit judge, I think these are at least bronze-medal worthy.

If your closing ceremony party needs another entry, I just remembered that I had taken a previous jaunt into Chinese-inspired cookiedom with these Five-Spice Molasses Cookies, which are silver-medal worthy, Russian judge or no Russian judge.

Spread the sesame seeds on a small sheet pan and toast in the oven, stirring periodically, until golden. Set aside to cool while preparing the cookie dough.

In a stand mixer, beat together the butter and sugars until fluffy and light. Scrape down the sides of the bowl and add the sesame paste, beating until fully incorporated. Scrape down again and beat in the eggs, one at a time, then the vanilla.

Whisk together the flour, baking soda, baking powder and salt, then mix gently into the butter mixture. Add the cooled sesame seeds to the dough and mix at low speed until just incorporated.

Scoop dough by the tablespoon onto the lined cookie sheets, spacing two inches apart. Using a fork, squish each ball down as you would with peanut butter cookies.

Bake until the cookies are puffed in the middle and browned on the edges, 11-12 minutes. Cool the cookies on the sheet until firm enough to lift to a cooling rack, where they should cool completely.

If you don’t have ready access to an Asian grocery and your regular market’s “ethnic” aisle doesn’t carry toasted sesame paste, you could turn these back into peanut butter cookies with the same amount of chunky peanut butter and a cup of lightly salted, roasted peanuts, ground into a fine gravel in the food processor. 1 1/2 cups of chocolate chips, should you be so inclined, would hardly go amiss.

If you do have access to an Asian grocery and want to get really exotic, you could try black sesame paste and seeds instead, which will give these an even smokier flavor and a color probably closer to volcanic ash than terra cotta.

Next time, just for an additional crunch and sparkle, I might add a sprinkle of raw sugar on top of the cookies before baking.

Last night’s dinner put an additional dent in my reserve of olive oil (currently five different kinds), tahini, and herbs, and completely used up the basmati rice. It also made excellent use of Sunday morning’s farmers market haul.

Pattypan squash, white eggplant and long peppers were tossed with olive oil, garlic paste, salt and herbs and roasted at high heat until caramelized outside and tender inside. The roasted vegetables were served on a bed of buttered rice and topped with a cool and lemony sauce of yogurt and tahini, which I’d previously modified from one of my legitimately Greek cookbooks. If you preferred to use this as a side dish, you could forego the rice or other starch and toss the vegetables lightly with the sauce instead.

I must give His Lordship credit for the roasted vegetables, since he did all the prep work and came up with the marinade. His mad knife skills are greatly to be envied, and his creativity is boundless and seldom disappoints.

Roasted Vegetables with Tahini-Yogurt Sauce
Serves 4-6 as main course over rice, more as a side dish

Position the oven racks in the middle and lowest position, and preheat oven to 450 F. Line two baking sheets with foil or parchment.

Place the cubed eggplant in one large bowl, and the summer squash and peppers in a separate bowl.

Mince the 5 cloves of garlic until fine, then sprinkle with salt and smash under the flat side of the knife until a smooth paste forms. In a small bowl, combine the garlic paste, olive oil, herbs, paprika, salt and pepper. Pour half the marinade into each bowl of vegetables, and toss until everything is evenly coated.

Spread the eggplant in a single layer on one sheet and the squash and peppers on the second, and place each sheet on a separate rack in the oven. Roast until vegetables are caramelized and tender, approximately 20-30 minutes, stirring the vegetables and rotating their pans once during baking.

While the vegetables are roasting, repeat the smashing process with the final clove of garlic for the sauce. Add the paste to a large glass measuring cup, and whisk together with all the sauce ingredients except the water until well combined. Taste and correct seasonings as necessary, then stir in enough hot water to dilute to the consistency of heavy cream. Cover and refrigerate until ready to serve.

Serve the roasted vegetables over buttered rice or noodles, drizzled with several spoonfuls of the yogurt sauce and sprinkled with the green onions.

It’s preferable to use ordinary olive oil rather than extra virgin for the roasted vegetables, since extra-virgin will lose its flavor under the high heat anyway. For the sauce, which is uncooked, a good extra-virgin is best, and if you have lemon-infused, by all means use it.

Since we have Penzeys Parisien herb blend, that’s what we used. You could make your own blend of chives, dill, basil, tarragon and chervil, or any combination of dried herbs you prefer. If I’d had some, minced fresh parsley would have been an excellent addition to the finished dish, for both flavor and color.

The sauce will get increasingly garlicky the longer it sits, so if you want it really strong, prepare it well ahead. Conversely, if you’re garlic-averse (hey, it takes all kinds), cut the garlic to half a clove and make it just before serving. 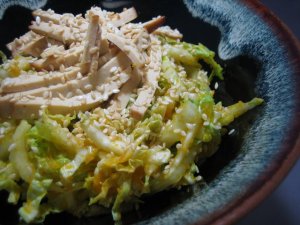 Contrary to the impression created by that tag cloud to your right, I do not subsist entirely on cookies.

In an effort to show that I’m not just about sweets, this was our quick, refreshing and easy middle-of-the-week dinner tonight. It was thrown together in all of fifteen minutes, because the baked tofu was store-bought and the carrot dressing was left over from Monday’s arugula salad. Still, even with making the dressing from scratch and simply pan-frying some plain tofu with a splash of soy and a sprinkle of seasoning, you’ll still be well under the half-hour mark on this one.

The carrot dressing, the same kind you frequently get on salads in Japanese restaurants, is sweet and substantial enough to act almost as a second vegetable. You could add any other embellishments you like, but it’s been so insufferably hot that I have barely wanted to eat, let alone cook, and this kind of plainness is exactly what I was looking for. With the tofu, it’s a full meal for a summer day, but without the tofu it would be a great side dish for heartier fare in less oppressive weather.

Roughly chop the carrots and place in a blender with the water, vinegar, ginger, scapes or shallot, soy, sherry and sesame oil. Blend until smooth. With the motor running, drizzle in the oil slowly to form an emulsion.

In a dry frying pan over medium-high heat, toast the sesame seeds, stirring or tossing frequently, until golden. Remove from heat and let cool to room temperature while finishing the salad.

Thinly slice the tofu into strips.

Finely shred the cabbage and toss with enough dressing to generously coat but not drown the greens. Dish into shallow bowls, top with the tofu, and sprinkle heavily with the sesame seeds.